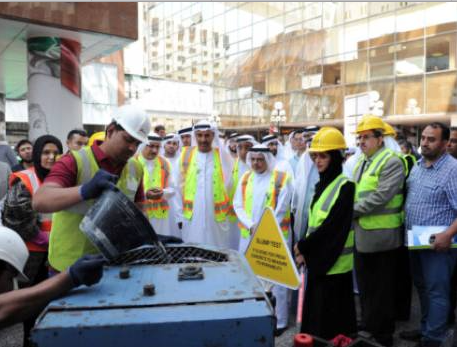 Dubai: All new buildings in Dubai will be made with “green concrete” that extends the life of buildings by decades, officials said on Sunday.

SCMs include materials such as Ground Granulated Blast Slag (GGBS) and fly ash. A typical internationally recommended SCM to OPC ratio is a mixture made of 64 per cent GGBS and 34 per cent OPC.

The announcement came during a press conference at Dubai Municipality’s Deira headquarters on Sunday.

According to research cited by the municipality, producing one tonne of OPC is accompanied by the emission of 1.1 tonnes of carbon dioxide (CO2), a greenhouse gas that is thought to contribute to global warming.

Other harmful side-effects include the accompanied production of huge amounts of dust and a reported increase in respiratory diseases in populations close to cement factories, the research added.

By comparison, SCMs are cleaner, more durable and “competitively priced”, if not cheaper, officials said.

Substituting SCMs in place of OPC cuts CO2 emissions by 80 per cent while increasing resistance to salts, which is a factor to consider in the local industry because of the soil composition of Dubai. The materials also improve thermal insulation of concrete, making them more suited to Dubai’s extreme heat.

He expects the industry to achieve full compliance by the end of this year. Lootah said the new rule is in line with the general drive towards sustainability in Dubai led by the municipality.

Abdullah Rafia, assistant director-general for engineering and planning, Dubai Municipality, added that there is more than enough capacity, at 39 million tonnes per year, to meet demand for concrete in the UAE, which is currently around 19 million tonnes.

“There are 12 cement factories in the UAE; all are ready for this [SCMs]. We don’t have a problem,” Rafia said.

“Demand has been increasing since the 2008 downturn and it’s slowly catching up.”

Another advantage of using SCMs is that they are recyclables or leftover materials from other industries, Rafia added.