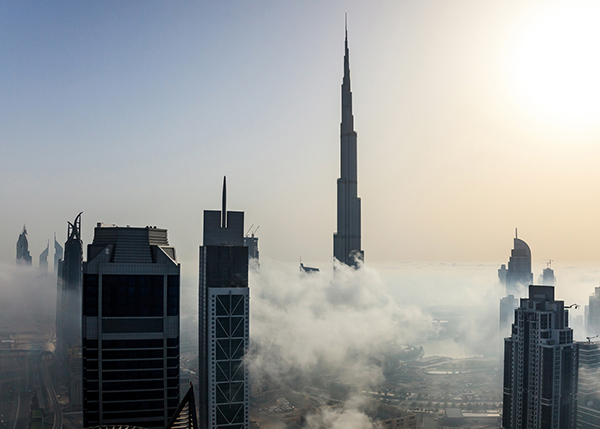 Dubai, home to the world's tallest skyscraper, will use jetpack-equipped firefighters in high-rise emergencies as early as next year.

A fleet of emergency-service jetpacks will be delivered to the Dubai Civil Defence in 2016, according to the Khaleej Times. Specially trained firefighters will use the jetpacks to tackle flames in some the city's tallest buildings.

The news comes months after fire tore through one of the world's tallest residential structures located in the United Arab Emirates city. The fire broke out on the 50th floor of the 79-storey Torch, a 336-metre-high skyscraper, in February.

"Dubai is leading the world in high-rises, and sometimes we have challenges or difficulties reaching those buildings," Dubai's Civil Defence chief Ali Hassan Almutawa told the Khaleej Times. "Sometimes we also find it difficult to communicate with people in those high-rises, especially when people are panicking from windows or balconies."

"With the jetpack we can go there and communicate physically with them and give them instructions," he added.

"In an emergency situation, we can't use the elevators and have to depend on firefighters physically climbing ladders," continued Almutawa. "With this we can lift equipment for our firefighters."

The Martin Aircraft Company is adapting its existing models to better suit the needs of flying firefighters. A standing platform will be added between the propeller engines, to allow pilots to let go of the controls and move around more freely, as well as carry equipment.

"There will now be a new generation of firefighters with this," said Martin Aircraft Company CEO Peter Coker, who went on to explain how "easy" the flying machines are to operate.

"It's got a fly-by-wire system that has a sort of flight computer, so the aircraft is very stable," he said. "If you let go of everything, the aircraft will come to a hover."

Manned test flights of a Martin Aircraft Company-designed jetpack were first approved in 2013. The company claimed its design was the world's first practical jetpack.

"In a few years they will likely be used by customers in a very controlled environment, and we'll probably have situations in which we create clubs for people to go and fly the jetpacks," said Coker.

The use of jetpack technology in the United Arab Emirates isn't restricted to its emergency services. Earlier this month, footage emerged of two jetpack-equipped daredevils flying alongside a passenger plane over Dubai's landmarks to promote the country's Emirates airline company.

We recently investigated how and why Dubai is trying to become a global design centre and reported on the city's latest construction boom.

Dubai is home to 911 high-rise buildings, 88 of which are taller than 180 metres (591 ft). Burj Khalifa, by Chicago office Skidmore, Owings and Merrill, is the world's tallest structure at 828 metres (2,716.5 ft). The American company also added a twisting skyscraper to the city’s skyline recently, which is 307-metres tall (1007 ft).

Princess Tower is the city's next-tallest structure, which reaches 414 metres (1,358 ft) into the sky. The building, located in the Marina district of Dubai, is currently the 20th tallest in the world.

Plans for the world's tallest twin towers were also unveiled for Dubai Creek Harbour last year. The rocket-shaped structures will form part of a wider development along Dubai's waterfront.