The Unlikely Home of the World's Next Tallest Skyscraper 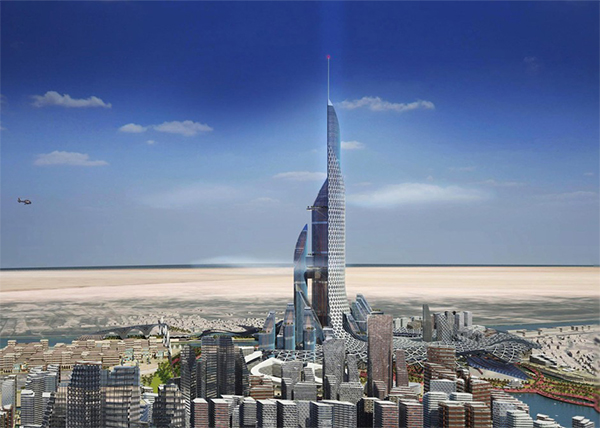 So many things about the Bride of the Gulf seem unlikely. It’s planned to be the world’s tallest skyscraper, soaring nearly three-quarters of a mile into the sky. It was designed not by Adrian Smith + Gordon Gill—the architects behind the Burj Khalifa (currently the tallest) and the Kingdom Tower (soon to be the tallest)—but by AMBS Architects, an Iraqi firm.

And the Bride isn’t destined for the UAE or Saudi Arabia. The world title-holder will be built in Basra, Iraq. That might seem like a shock, too, since Basra was the site of the first major battle in 2003 during the Iraq War, and given that Iraq’s territorial coherence is under threat today.

But the Basra Province is a transformed place. Its 3 million residents are rebuilding and even pushing for autonomy. Make that 3 million oil-wealthy residents. It makes sense that Basra, a metropolitan city before its suppression under Saddam Hussein, would emerge as the new economic capital of Iraq. (Of course, it’s hard to believe how fast fate can transform a city, considering what has happened in Raqqa, Syria.)

What’s hardest to explain is the building itself. The “Bride” might refer to the veil-like structure that appears to flow from the curtain-wall of the 3,780-foot-tall building into a canopy that covers the base at the podium level and extends seemingly several city blocks from there. How this nearly 17 million-square-foot building will work as a net-zero site, fueled by solar energy, is anybody’s guess. If it operates even close to that efficiently—and it’s not out of the question—it would be a pinnacle of sustainability, at least in terms of energy consumption.

What really sets the Bride apart is its size—not just its height. The architects put out a graphic showing how much more usable space the Basra super-tall has than its peers. Ultimately, this is a function of the area of the base of the building. The elevator and mechanicals column inside the building doesn’t shrink as you go up, so to rise to a height of around a kilometer (much less a mile) requires a much, much broader base to begin with. In the case of the Bride, the building’s height might be a product of opportunity in Basra.

The Bride isn’t the only concept for a series of inter-connected skyscrapers. 1 Dubai, a vertical city designed by Adrian Smith + Gordon Gill, also makes use of connected buildings (three in this case, in place of the Bridge’s four). The race to complete the tallest building in the world may have just given way to a race to create the first vertical city.