Tallest skyscrapers in the world 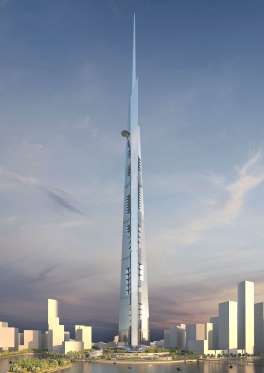 The Jeddha Tower in Saudi Arabia is all set to seize the title of the world's tallest skyscraper from Dubai's Burj Khalifa in 2020. Now that the funding for the ambitious $US 1.2 billion project is secured, the new 200-storeyed building will stand tall at 3,280 feet (1 km). Here’s a look at the other skyscrapers from across the globe.

Since its completion in 2010, Burj Khalifa in Dubai, United Arab Emirates, has been the tallest building in the world. Designed by the architects Skidmore, Owings & Merrill, it is a mighty 2,722 feet (828 m) tall and has 163 floors.

At a height of 2073 feet (632 m), the Shanghai Tower is the tallest building in China. On completion, this structure would be home to the world's fastest elevators, which will climb the tower at the speed of 18 metres per second.

The third tallest building in the world is the Makkah Royal Clock Tower located in Mecca, Saudi Arabia, whose most striking feature is its clock tower. The clock face is so large that the clock can be seen from 25 kilometres away. The height of the building is 1970 feet (around 600 m).

Initially called the Freedom Tower, at 1,776 ft tall (541.3 m), One World Trade Center is the tallest building in the western hemisphere. Built on the site of the destroyed Twin Towers, it took 10,000 workers 12 years to complete the 104-floor building.

Due to be completed in 2016, the fifth-tallest skyscraper — CTF Finance Centre, Guangzhou — is a mixed-use tower that will feature office space, a hotel, apartments and a shopping centre in its podium. It will be a 1739 feet (530 m) tall building. (Pictured) Guangzhou, China skyline on the Pearl River.

The Shanghai World Financial Centre, also known as the bottle-opener due to its shape, measures just 52 feet (16 m) less than Taipei 101.

One of five Chinese buildings in the top ten, Hong Kong's International Commerce Centre is 1588 feet (484 m) tall and houses the  Ritz-Carlton - the world's highest hotel - on its top 13 floors.

The Petronas Towers held the title of the world's tallest structures between 1998 and 2004, when they were overtaken by Taipei 101. The Malaysian landmark is of the same height as the International Commerce Centre in Hong Kong and is a popular photo spot for tourists.