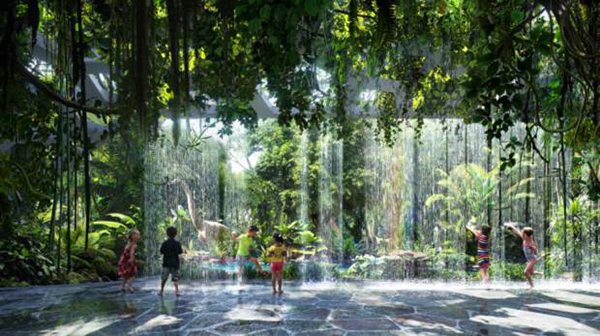 The artificial rainforest to come up soon in a high-rise building in Dubai will have a microclimate cooler than the city’s ambient temperature and a rain system where guests will not get wet.

The Rosemont Hotel and Residences, currently under construction on Shaikh Zayed Road near Tecom, will be home to an outdoor destination for visitors all year round even during the peak of summer.

The twin-tower structure, where one is a hotel while the other is a serviced apartment tower, will rise on a pedestal called The Podium.

On the podium roof is where the 75,000 sq ft rainforest will be located, complete with splash pools, sand-less beach, and rainforest cafe.

“The intent is to create an environment that is usable year-round. It’s promoting more outdoor usage even in the harsh climate here all summer,” Preetam Panwar, executive director of Zas Architects and project director for Rosemont Hotel and Residences, told Gulf News.

“We’re creating a microclimate that is way cooler that the harsh summer you face in exposed areas which are barren and dry. This is something very similar to Al Barari, where it has its own microclimate when you drive in, it’s always 4C to 5C cooler there just because of the plantation. This is the environment we’re trying to mimic.”

Al Barari is a botanical residential haven off Shaikh Mohammad Bin Zayed Road where 80 per cent of its land area is made up of green spaces.

Panwar said the rainforest will incorporate as many indigenous trees, shrubs, ground covers as possible. Some of the trees that are currently being considered are palm trees, Anogeissus tree, Frankincense tree, Delonix regia, Zerbet, weeping willow, various ferns and tree climbers, and desert rose, among others.

“The rainforest in itself will be a destination, more of a park where people can go and enjoy an evening or an afternoon. It’s going to be 2C to 3C cooler than the ambient temperature.”

When asked how a rainforest can sit on top of a building, Panwar said the concept is similar to having manicured landscaping on rooftops, although having a rainforest is more complex and, obviously, more grand.

“Structurally, we need more soil to hold trees which are slightly taller than what you see on roof landscaping. Plus there is more green cover and it is technologically more advanced in terms of the plantation and the surroundings.”

The rainforest will have adventure trails, play zones, waterfalls and streams, and a prehistoric Jurassic-inspired marsh.

This tropical oasis will also have a sensory system that creates a 360-degree experience that simulates the sensation of being surrounded by rainfall without actually getting wet.

“As soon as you come out of the lobby, you’ll reach the rainforest floor and you’ll be welcomed inside the Rain Room where you’ll see rain but as you walk through it you won’t get wet because it has sensors on top and it stops water flowing in a two-metre radius around the person walking in the room.”

The project is on track and is expected to be complete in December 2018, Panwar said.

“Integrating indigenous plantation to create an effect of a rainforest is something that will probably be attempted for the first or second time in this region. It’s a challenge for us; it’s an education exercise that we are going through as we are designing it.”


AT A GLANCE: Rosemont Hotel and Residents

The Arrival Area features leading-edge audiovisual, robotics, and 3D video mapping technology on the roof of the drop-off area that creates the illusion of being surrounded in lush rainforest, majestic ocean and the expansive sky.

The hotel tower has 448 rooms while the serviced-apartment tower has 280 designer suites. The residences are not for sale and will be operated by Curio Collection, by Hilton.

Skypool features a glass-bottom pool starlit from below, mimicking the night sky