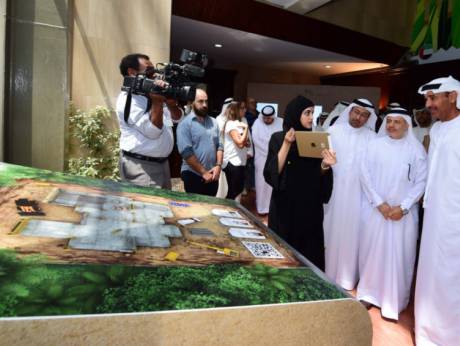 New buildings in Dubai will now be rated based on the implementation of green building standards and buildings that do not meet requirements to achieve the minimum bronze rating will not be given permits, the Dubai Municipality announced on Tuesday.

The Director General of Dubai Municipality, Hussain Nasser Lootah, announced the launch of the green building rating system called “Al Safat,” at a press conference. Safat in Arabic means date palm fronds and refers to the traditional Arabic system of using palm fronds as roofing to keep the interior cool. It was a symbol of construction and also represents the local environment because all parts of the palm tree were utilised for various purposes.

Lootah said the initiative is designed to achieve high performance of buildings to promote human and environmental health by strengthening the planning, design, implementation, and operation phases of buildings. The concept aims to achieve a smart, sustainable city status for Dubai by 2021. 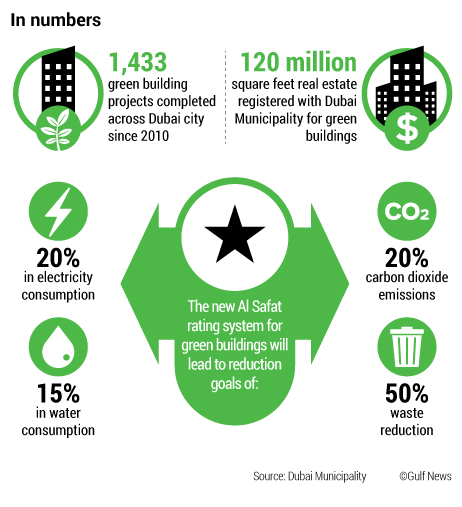 The rating is split into four classifications: platinum, gold, silver and bronze (in the descending order) and every building must adhere to the minimum bronze category requirements. Higher ratings are optional. This will be applicable to all upcoming buildings and to those built since the mandatory implementation of green building code in Dubai in 2014.

While Al Safat will be mandatory for new buildings taking permits from September 1, buildings that have already been certified as green have to apply again for a rating certificate.

“Meeting requirements for bronze certification is mandatory for all building owners, investors and developers. However, all parties are encouraged to apply additional qualifying elements to enhance their rating and benefits to the occupants and environment,” said Lootah.

He said the rating system applies to all types of buildings — residential, commercial, industrial and other facilities.

For the old buildings, the municipality has adopted a strategy of retrofitting them with environment-friendly and sustainable materials and equipment for lighting, air-conditioning etc, he added.

“By applying Al Safat standards, a building can produce savings in energy use of up to 34 per cent,” said Al Maidour.

Khalid Mohammad Saleh Al Mullah, director of the Buildings Department, said: “We anticipate carbon dioxide emissions will see a reduction of 7.3 million tonnes over the next five years, producing the same effect as planting 36 million trees — 40 times the size of Zabeel Park.”

According to him, more than 90 per cent of buildings in Dubai constructed after 2001 already meet the necessary criteria to qualify for Al Safat bronze certification. “The launch of Al Safat rating system complements the green building project perfectly, with its most prominent goals to reduce the consumption of electricity by 20 per cent, water consumption by 15 per cent, carbon dioxide emissions by 20 per cent, and waste by as much as 50 per cent,” he said.

Lootah also unveiled a Green Wall project of 30 metres’ height at the municipality’s headquarters to raise awareness about the usefulness of green practices in buildings.

The municipality has developed a smartphone application (green buildings) to explain the laws, terms and conditions of green buildings in simple language. It will also launch a website dedicated to green buildings (www.alsafat.ae) to provide information about the rating system, and a list of suppliers of green materials.

Since 2010, 1,433 green building projects have been completed across Dubai while the municipality has registered over 120 million square feet of real estate since the application of green building code became compulsory for all new buildings in March 2014.