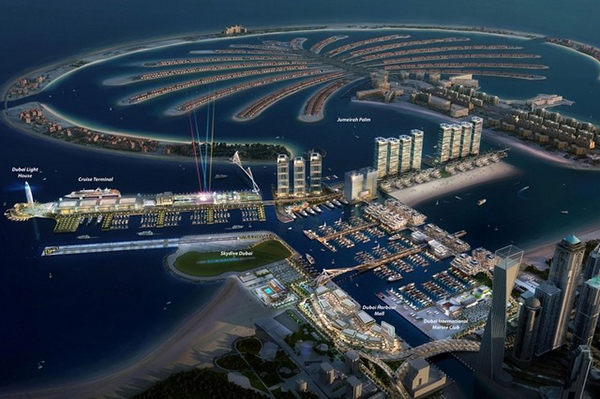 A major new waterfront development featuring the Middle East’s largest marina capable of handling 1,400 vessels is to be built on the Dubai waterfront.

The 20 million square foot Dubai Harbour project will be developed by Meraas Holding and will contain a 135 metre-high tower, Dubai Lighthouse, that will house a luxury hotel and an observation deck. It will also feature a 150,000 sq ft cruise liner terminal capable of handling 6,000 passengers, as well as entertainment and retail space, a yacht club, shopping mall, hotels and residences.

The 1,400-berth marina will increase Dubai’s capacity for handling yachts by almost 50 per cent from the current 3,000 berths in the Emirate. It will also add the capacity to handle larger yachts of up to 85 metres in length. The project will be built on a site at Mina Seyahi on a plot between Jumeirah Beach Residence and Palm Jumeirah off King Salman bin Abdulaziz Al Saud Street (formerly Al Sufouh Road) and will integrate the current Skydive Dubai, Dubai International Marine Club and Logo Island sites into a single community through a new road network and a monorail. It will be developed in several phases and is expected to take four years to build once work starts.

A master plan for the project was unveiled by Sheikh Mohammed bin Rashid, the UAE Vice President and Ruler of Dubai, on Monday. He said that Dubai Harbour "represents a unique and innovative new addition to the region’s tourism landscape".

"I am confident that the project will have a highly positive effect on our entire region’s tourism sector. We are keen to encourage new projects and promote investments that will contribute to bringing to the region more tourists interested in experiencing this part of the world," he said. Meraas has already begun talks with four of the world’s biggest cruise liner firms with a view to targeting this sector, as well as with Emirates Airline.

It has also held talks with the RTA over connectivity. As well as being able to access the site from King Salman bin Abdulaziz Al Saud Street, there will be a new bridge linking directly from Sheikh Zayed Road. It can also be accessed through public transport either from the monorail system at Palm Jumeirah or from a metro stop at the new Bluewaters Island project. There will also be a pedestrian bridge with a jogging and cycling track to the Palm Jumeirah.