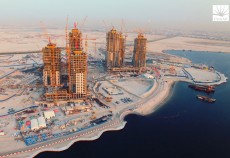 Structural work is currently underway for the supertall The Tower at Dubai Creek Harbour, as well as other developments planned for the master community, the video shows.

Since The Tower's ground-breaking ceremony in October 2016, more than 145 barrette piles have been laid to depths of more than 72m for its development.

At the planning stage, the piles used for the foundation were tested to a record test load of 360 MN (36,000 tonnes) by foundation specialist, Soletanche Bachy, to ensure their suitability for the project.

A cathodic protection system, similar to that used on the Burj Khalifa, will guard against corrosion.

Located next to Ras Al Khor Wildlife Sanctuary, Dubai Creek Harbour is being developed as part of a joint venture (JV) between Emaar Properties and Dubai Holding.

Worth $1bn (AED3.67bn), The Tower will be at the centre of what the developers called a “new smart city of the future”, which will feature nine districts.

The Island District, Creekside 18, Harbour Views, The Canal District, and The Sanctuary District are being developed at the 6km2 Dubai Creek Harbour.